The way today went, I could have mistaken for Armageddon.  First we started off with a fire.  As I was checking email before starting school, the lights started flickering.  I worried the kids had jammed a piece of bread in the toaster so I yelled from my bedroom, "What are you guys doing?"  They hollered back, "FIRE!!"  Still thinking it was the toaster, I ran into the kitchen looking frantically around.  No fire but I could smell a terrible stench.  "WHERE???"  They pointed to the little room off the kitchen - our bathroom which also serves as laundry room.  The room was full of black smoke and either the kids pointed out or I spotted the smoke coming from the top of the dryer.  I shoved the stacked washer and dryer away from the wall and pulled the plug.  Then I ran for the camera  - before putting a wet towel on the dryer and ruining the picture, of course! 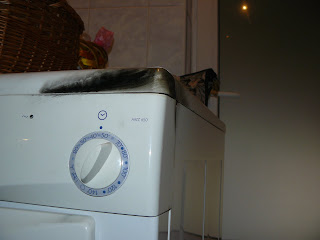 For the following 4 hours of school we put up with the awful smell and three brief electrical outages (who knows why).  After lunch I heard loud banging on the roof over our enclosed balcony-turned school room.  I opened the back door and leaped to the middle of the yard lest anything fall on me.  Up above us our neighbors were installing a new window which subsequently resulted in huge chunks of brick, mortar and plaster falling onto our roof and crashing to the ground.  I yelled up to the workers replacing the window and told them they should put something there to catch these pieces so they don't hit a child.  Their explanation was, "It's an old building.  What do you expect?"  I told them I expected them to make it safe.  Chunks remained on the roof which could at anytime fall onto the head of one of my children.  After their scoffing, I went off to find the owner of the apartment and talk to him myself.  He promised me just 10 more minutes.  I asked him to then clean up all the chunks and the ones still on the roof.  Which, thankfully, he did. 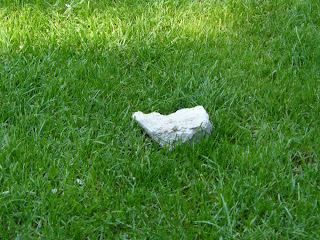 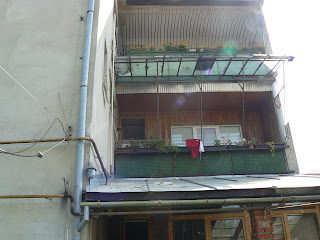 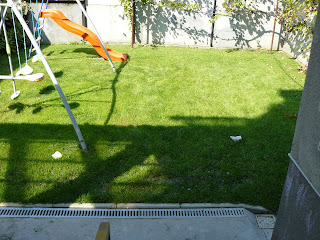 My friend asked after hearing today's story, "When is your husband coming home?"  I replied, "I've been asking myself that same question."  Why do we get all the excitement when he's 780km away?  Now before any more adrenaline rushes, I'm off to bed.

....Ugh, just had another bad encounter with a different neighbor.  Can this day get any worse?
Posted by Unknown at 9:53 PM 2 comments:

For those of you who don't live in Ukraine, can you solve this riddle?

Our washing machine broke and today the repairmen came to take it away and fix it.  In the process of disconnecting the water intake, the valve broke and was spraying water everywhere with unstoppable pressure.  Water was flooding the bathroom and pouring out into the kitchen.  George yelled, "Turn off the electricity!"  How can turning off the electricity to our apartment stop the water from flowing?

Prize goes to first person not experienced with life in Ukraine who can correctly solve the riddle.  If you live or have lived in Ukraine, you're not allowed to give away the answer.
Posted by Unknown at 10:56 PM 4 comments: