With all the buzz about the Penn State scandal and ensuing advice from leading news sources recommending that children never be alone with an adult, I am afraid I do not know how to live in this new American society.  This wasn't the America I grew up in.  It isn't the America I left behind 15 years ago.  Now I wonder, is it safe for my children to play on the playground?  Can they walk down the street by themselves?  Do I need my eye on them all the time in the grocery store?  Do I need to have those conversations about good touching versus bad touching and "don't talk to strangers?"

It also makes me wonder about where I live now.  It seems refreshing to live in a place where children can be outside without the constant watchful eye of a parent.  Children from the age of first grade walk to school and home on their own.  Moms leave their infants in strollers outside the shops as they run in to buy something. Boys and girls change for dance lessons in one open room in front of all the moms and dads dropping them off.  Prepubescent girls can go topless at the pool.  (I admit those last two make me uncomfortable.)  I have never heard a story of molestation or kidnapping.  I'm not naive enough to think it never happens but there surely isn't a spoken fear of it happening.  But then I wonder, should I fear?  Is this culture of innocence just false security?  Or has America gone over the deep end by fostering fear and distrust?  Maybe the answer lies somewhere in between.  I would like to know what that line is. Where do you draw the line between freedom and safety?
Posted by Unknown at 2:20 PM No comments: 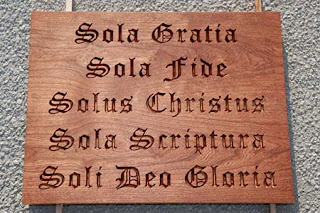 I was not born and bred CRC.  I cannot play “Dutch bingo.”  I did not attend Calvin College or even Dordt.  I married into the Christian Reformed Church.

My first exposure to the denomination, and the Reformed faith in general, was in high school.  My best friend was (and still is) a member of the church that I now call my “home church,” Silver Spring CRC.   I used to think it strange that she attended catechism and played on a church softball team.  Their sanctuary sported an orange carpet and their members ate food with names that I didn’t recognize like oli bollen, hagelslag, and banket.

Since those high school days, God seemed to have had me on a track to “reform” me.  I attended a Reformed Presbyterian college, Geneva, not because I was looking for a Reformed school but because they offered me some good scholarships and I liked the community I experienced when I visited the campus.  I became good friends with RP kids and after checking out lots of other churches, found my place at Geneva Reformed Presbyterian Church.  After college I went to Hungary to teach English as a second language and landed in a tiny town which just so happened to have three CRC missionaries teaching in the same Hungarian Reformed high school.  Coincidence? – I think not!  Three years into my missionary life in Sárospatak, Hungary I started dating George.  By the time God brought us together, I was already pretty much “reformed”.

But it hasn’t been until the last few years that I’ve come to really appreciate the little denomination and its Reformed faith.  What I have uncovered is that the CRC is founded on solid, Biblical teaching that does not sway from one spiritual movement to the next.  I discovered that the entire Bible, from Genesis to Revelation, is ONE story.  I learned that the Bible isn’t teaching moralized lessons such as “dare to be a Daniel” but is where I encounter who God is!   I have come to love and value those questions and answers that my high school friend memorized.  How that little book has helped me find answers to so many big questions of life!

I appreciate the CRC’s value on the professionalism of their pastors (and not just because I married one)!  I didn’t used to think that studying the Bible’s original languages or cultural context really mattered that much.  As a kid, I was taught and encouraged to read the Bible for myself and that my interpretation was just as valid as anyone else’s.

I have come to respect Christian education and recognize the important role teaching from a Christian worldview has on rearing a generation of children who can engage their world and culture and be agents of God’s transforming power.

I am grateful that God brought me along the “reformed” road where I have discovered God’s grace, been rooted in faith, been challenged to grow in knowledge and wisdom, and been enabled to serve my Lord and King!
Posted by Unknown at 8:43 PM No comments: