Today was another ordinary day full of the unordinary.  Actually, today's story started about 5 days ago when three people rang our bell.  They were from the gas company and came to inspect our furnace.  They wasted no time in finding this and that unacceptable - regardless of the fact that George told them it was the gas company itself that did it that way.  For the following three days, George spent hours going from this office to that office to pay this and pay that to get everything up to the NEW STANDARDS!  One such requirement was to have a chimney sweep come and check the furnace vent and install a separate air ventilation.

Right as I was preparing lunch, the chimney sweep arrived - but he was not just any chimney sweep but in fact the very one who a statue was made of and erected in the center of town.
Above our furnace, Berti examined the vent and pulled out handfuls of that expanding insulation.  I don't know if that had actually been blocking our vent or not but I'm glad to have it out of there nonetheless.  Sure sounds like a fire hazard to me.  After starting a small fire in the vent he confirmed that the vent was clear.  Next he moved on to the separate air ventilation.  Above the sink there was an uneven patch of plaster covering the brick in the shape of circle.  Assuming that was an old air vent, he tore off the plaster, discovered a hole and removed a bunch of brick.  It turns out the hole goes nowhere and he doesn't have the faintest idea where the old air vent could be because the walls have been plastered.  To solve our problem he recommended we buy an electric fan to put in the hole.  The only reason I can guess we would put a fan in this closed up hole is to give the appearance that everything is in order.  Like so many things in this country - it's only the appearance that matters.  But that's a whole other topic.  Don't get me started on that one!

Since the gas inspectors have been paid, I highly doubt that they will return to follow-up on their demands.  But if they do, everything should be fine.  Right? 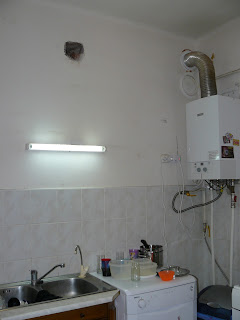 ....and probably this summer we'll have to tear that wall apart and find the actual vent.
Posted by Unknown at 10:00 PM No comments:

Matthew chose Star Wars the Clone Wars for his birthday theme this year.  After a week of intense preparations, we celebrated with a Jedi training and awarded 11 children their Jedi badges.  It was a lot of fun.  This video will keep the memories fresh for many years to come.

In case you didn't know, Ukraine is predominately a "Christian" nation with 96.2% of her citizens claiming to be Christians (according to CIA factbook).  But this article from the Kyiv Post shows how confused Ukrainians are when it comes to understanding their religion.  Here are a few quotes from the article, Ukrainian Love for Astrology.

With a horoscope in the morning and a prayer in the evening, Ukrainians are an odd mix when it comes to believing in things supernatural.

Many Christian Orthodox believers partake in the custom, hardly questioning the clash.

This article gives evidence to the state of the Church in Ukraine.  If so many Ukrainians put their faith in a horoscope, then their faith in God is very low indeed.
Posted by Unknown at 9:33 AM No comments: