In our inbox this morning was a copy of the independent, English-language newspaper, KyivPost.  Here are just a few quotes from this week's paper to give you a picture of the challenges Ukrainians face.
KyivPost

* Freedom House, the U.S.-based democracy watchdog, presented a report last week in Kyiv warning that Ukraine is sliding towards authoritarianism under [President] Yanukovych.
* “Address the systemic and pervasive corruption that…touches the lives of every citizen at every level,” Thomas Mirow, president of the European Bank for Reconstruction and Development, said at an investors’ council meeting chaired by [President] Yanukovych.
* Ukraine is a high-risk destination for investment. According to the June Euromoney Country Risk Survey, Ukraine remains among the 10 riskiest countries in Central and Eastern Europe.
* Among those crimes allegedly caught on tape was the Sept 16, 2000 murder of journalist Georgiy Gongadze, a crime for which [Former President] Kuchma now faces charges of exceeding his powers.
* By 1944, only 700 of 220,000 Jews in Lviv, [Ukraine] were alive
* Ukraine’s former Prime Minister Yulia Tymoshenko asked the European Court of Human Rights on June 21 to recognize domestic criminal probes against her as politically motivated…Now in opposition and barred by prosecutors from travelling outside Kyiv, Tymoshenko has been charged with misallocating hundreds of millions of dollars while in office.
* In this homegrown culture of keeping investors out and roughing up those brave enough to arrive, even fast-growing domestic businesses whose owners have political clout no longer dare to raise fresh investment by listing on the local stock market.
* Objective, hard-hitting coverage of two high-profile events involving President Viktor Yanukovych were noticeably absent….While more subtle than outright censorship, we suspect these incidents demonstrate yet another layer of purposeful barriers to make it more difficult for citizens to get all sides of the story, in part by keeping out independent and critical journalists.

* Ukraine’s population has shrunk from 51 million people in 1991 to less than 46 million people today. Besides low birth rates and high mortality rates, millions of Ukrainians have gone abroad seeking better lives.
Source: http://www.kyivpost.com/
Posted by Unknown at 9:04 AM 1 comment:

I tried not to think too much about yesterday being Father’s Day.  For one, the daddy in our home isn’t home so there wasn’t any celebrating to do here.  Secondly, my own father is in his heavenly home so I can’t congratulate him either.  But then, maybe, it’s good for me to reflect on the impact my father had on my life rather than just try to avoid the pain of his loss.  With the pain may come some new appreciation.  So I’ll fight back some tears and write on.
My kids sometimes ask me about their Grandpa Snyder.  I really wish they could meet him, but even more that he could meet them.  I know they would love each other.  I would love to see them wrestle on the floor, to read a story, to admire cars together.  Most of all, I know my kids would laugh because that’s what many of my memories of my father include - laughter.  He loved to tell stories and sometimes got so caught up in his own stories that he “forgot” about reality altogether.  We didn’t have a DVD player to occupy us on our long car rides but we had dad’s stories.  I wish now that I had them recorded.
My dad was liked by nearly everyone he met.  In fact, I don’t know of anyone who didn’t like him.  He was a diplomat and peacemaker.  He loved people and found a way to relate to the old man in the nursing home, to the troubled teen, to the prisoner, to the highest authority in Nepal.  He made each one of them feel important.
What I appreciated most about my dad was the time we spent together.  I cherish the memories of fishing in the morning fog, contemplating the wording for the persecution reports, pulling the water pump from my car, and watching movies over a bowl of popcorn.
My dad showed me that I was loved – by him and by my Heavenly Father.  From him I learned to treasure the Word of God, to value Christian fellowship, to share my faith with others, and to be willing to follow God wherever he would lead me.  I remember my father’s reaction when I told him I was leaving for the mission field.  He said something along the lines of, “I always wanted you to go where God led you, but I never knew it would hurt to see you go.”
I am blessed to have known Steven Snyder as my dad and friend.
Happy Father’s Day, Dad!  I look forward to seeing you again one day!
Posted by Unknown at 4:54 PM 1 comment:

Elizabeth has received her first haircut.  All the little curls are gone, but this cut is cute and sassy - a good match for Elizabeth's personality! 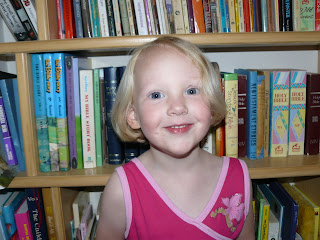 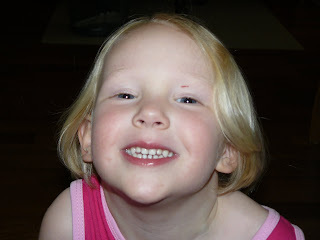 Abigail participated in her dance troop's performance on June 1.  I'm estimating over 500 people came for the two hour show held in our town's one screen movie theater.  This was Abigail's first year of dance lessons and was considered a preparatory year.  We were quite impressed by each of the group's dances!  Enjoy the following video of Abigail dancing the quick step.  (Link: http://www.youtube.com/watch?v=CPHjBmoJGck)

Posted by Unknown at 6:45 PM No comments: